Now. Imagine if you had developed an illness. A doctor sat you down and told you that all they had was theory, a few dozen large studies, and two pills that have half a chance of not working. You'd be pretty loud about wanting a cure, wouldn't you?

May is Fibromyalgia Awareness Month. Fibromyalgia is a disabling condition that affects muscles, soft tissue, and the nervous system. In layman's terms, it's a pain disorder that never goes away. Your brain is said to send signals that you are in intense pain, constantly, to places where you are not in pain. Even a light brush against the skin can trigger this reaction. You constantly feel pain/tenderness throughout your body no matter what time of day or how you're feeling otherwise. It is incurable and treatments are often ineffective at best - in my country there are two approved medications and one is highly addictive - the other just stops working after a tolerance is built. Many patients turn to medical cannabis treatments and herbal therapies, with mixed results. We simply cannot judge each other for our forms of pain relief, because all of us are butterflies. We are all unique, one-of-a-kind, and often have differing symptoms. One person may have migraines, whereas another may experience anemia. One may gain weight, another may lose muscle mass. Fibromyalgia is truly a mystery, just like a butterfly.

We are disabled, and many of us require mobility aids such as wheelchairs. Some of us go blind or have vision problems from nerve issues, some of us have hearing problems, and some of us end up unable to walk or move. The condition does not get worse so much as changes, and it has hundreds of recognised symptoms and comorbidities due to how unique each case is. But the commonality we share is pain, exhaustion, and having every other related illness ruled out over years of invasive, repetitive testing.

In all likelihood, you know someone in your life, or know of someone in another's, that has fibromyalgia. I do - so there, you know of someone, now! We are fairly common and it's likely that any number of people you pass in traffic or in a shop may have it. It affects cis women the most, however, trans men (hi!) are the second highest group to have fibromyalgia. The cause is unknown. There's so little knowledge about fibromyalgia, especially because of the discrimination factor.

Fibromyalgia often results in criticism, judgement, bullying, ostracising, and abuse from the people around us and online. I can't count the number of times people have gone in on me for even bringing it up. For some reason, this disorder is perceived as "fake" by many people as you cannot physically see it. People promote "cures" to us all the time, peddling things like "have you tried yoga" or "this random seed/berry/legume will cure you" all the time knowing that we are desperate. But the sad truth is that there's little we can do. Learning to live alongside our symptoms is a key. As I'm writing this, my shoulders feel like they're being stabbed by flaying knives and my neck seized. I haven't done anything to them or hurt them, and I'm ignoring what would put someone else on the ground. This is why we call ourselves fibro warriors. We fight a war of pain with a straight face every single day.

Of course, some of us lose the fight. Fibromyalgia has been said to be one of the most common disorders that cause contemplation or completion of suicide, and many of our biggest community members have chosen to end their pain. We cannot judge them for this, only remember them as the beautiful people they were, who lost a hard-fought battle with something so horrible that if you could see it, according to one of my specialists, "it would look like we were being struck by electricity and bathing in battery acid and still smiling at you." Another poster I saw described it as if you pictured a tree as your body and lit it on fire. These aren't over-dramatic. The first symptoms I experienced genuinely felt like someone had spilled acid on my legs.

So many of us lose our jobs, homes, relationships, doctors, and families to prejudice. To them, we're lazy, we're making excuses, we're playing games of good days and awful ones. We can't show up to work every day, so we get fired. We can't be there for our partners, we lose them. I'm so lucky to have a partner whose mother also has this condition so they understand my needs completely. Finding people who love and understand us is key. Acceptance is key.

I can't stress enough now much we fibro warriors need your help. If you can, take a few dollars and give them to your country or city's fibromyalgia foundation, or a reputable pain-management centre, hospital or research centre. Even donate it to a local fibromyalgia or "people in pain" group. We all need your help.

Here are a few recommended places to donate:

Fibromyalgia Well Spring Foundation (My immediate local area - donations go directly into groups and services in my city that help me directly! I'd be thrilled if you donated here. This is a Canadian website but accepts many currencies.)

National Fibromyalgia & Chronic Pain Association (Multiple countries can be selected from the dropdown, accepts many currencies) 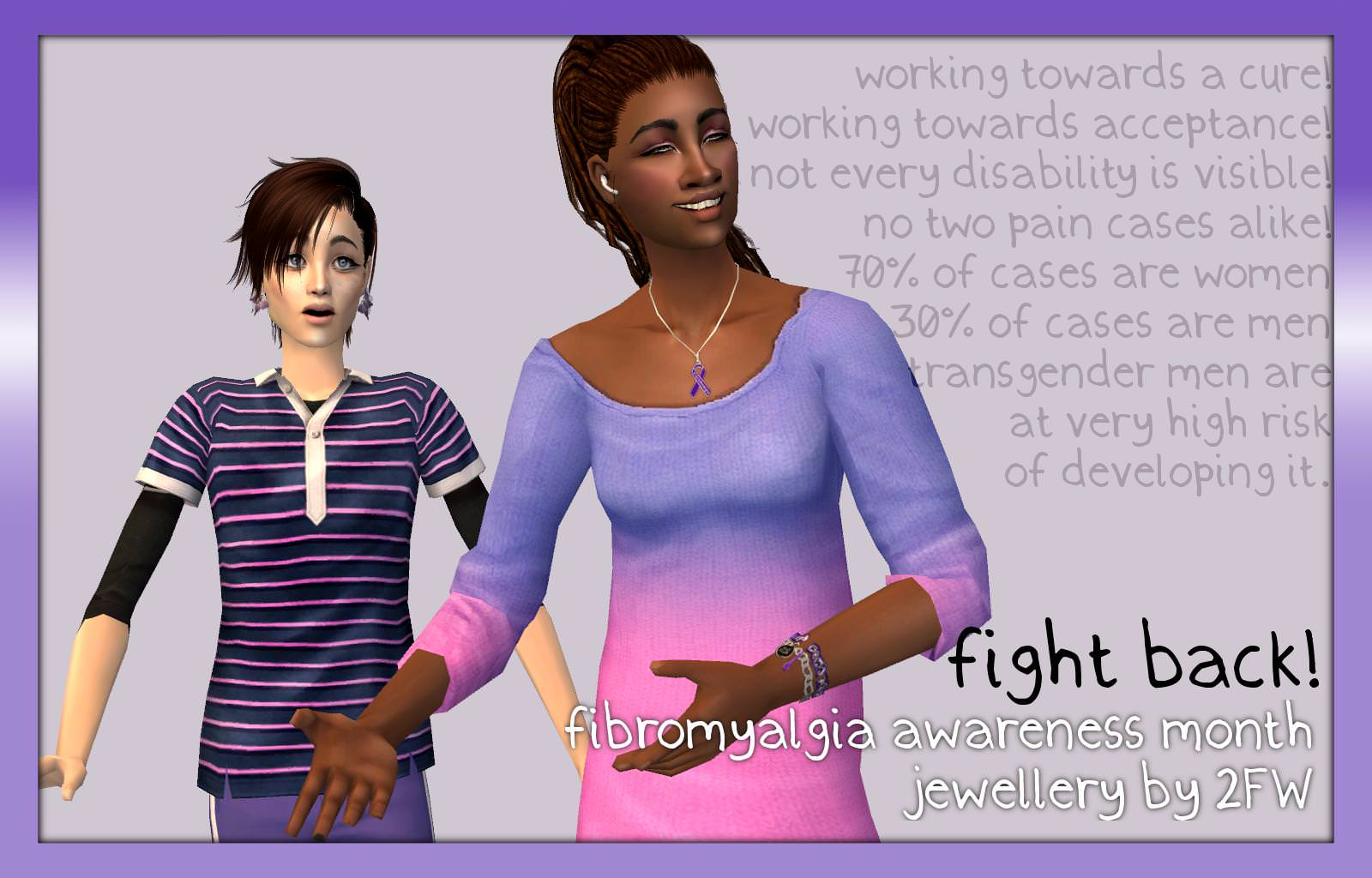 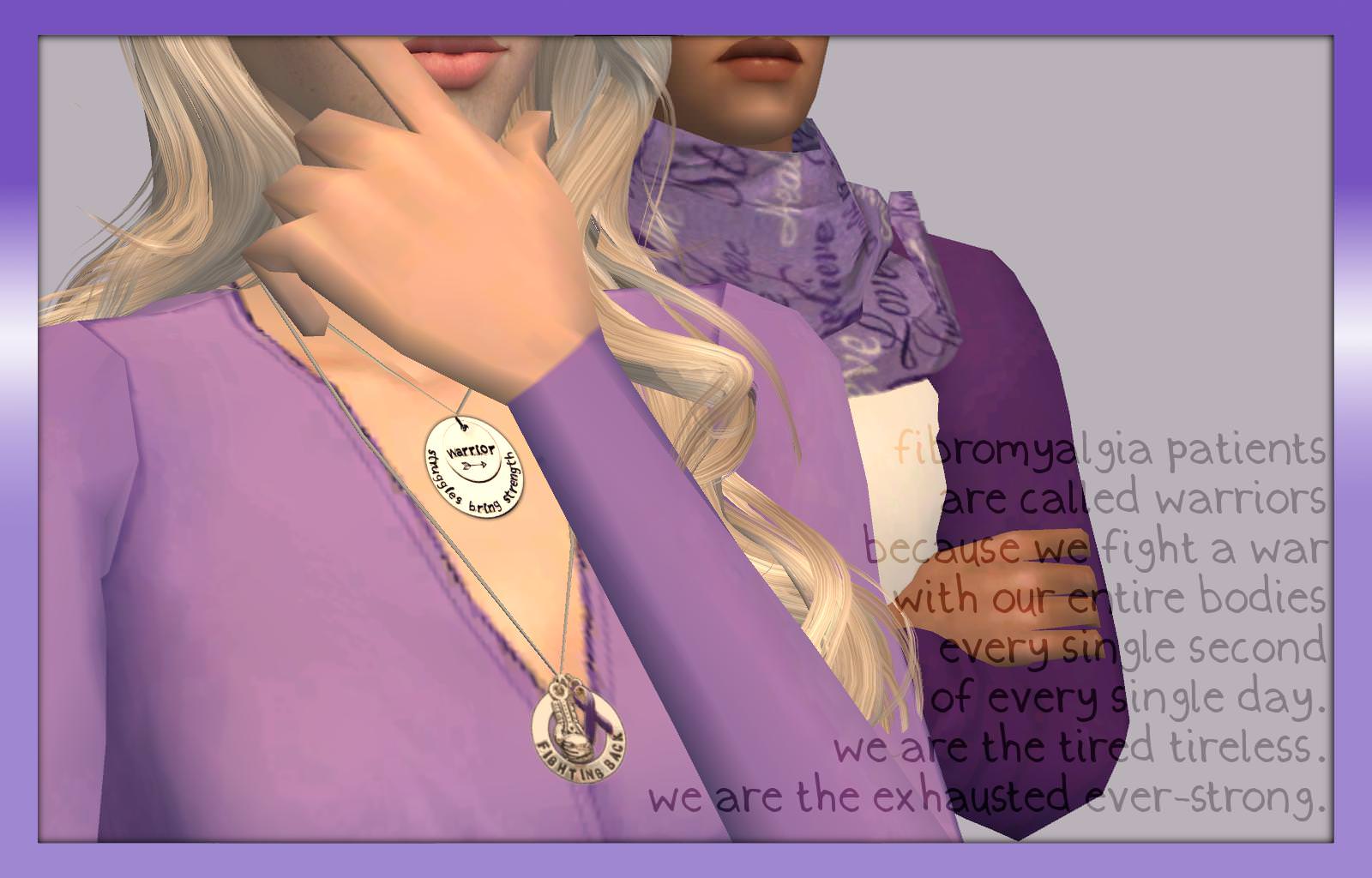 You get three necklaces: One with a boxer's glove that says "Fight Back" on a circle behind it, a purple medical awareness ribbon, and two circles that say "Warrior" and "Struggles Bring Strength" on them. You also get a scarf with purple butterflies and ribbons on them. 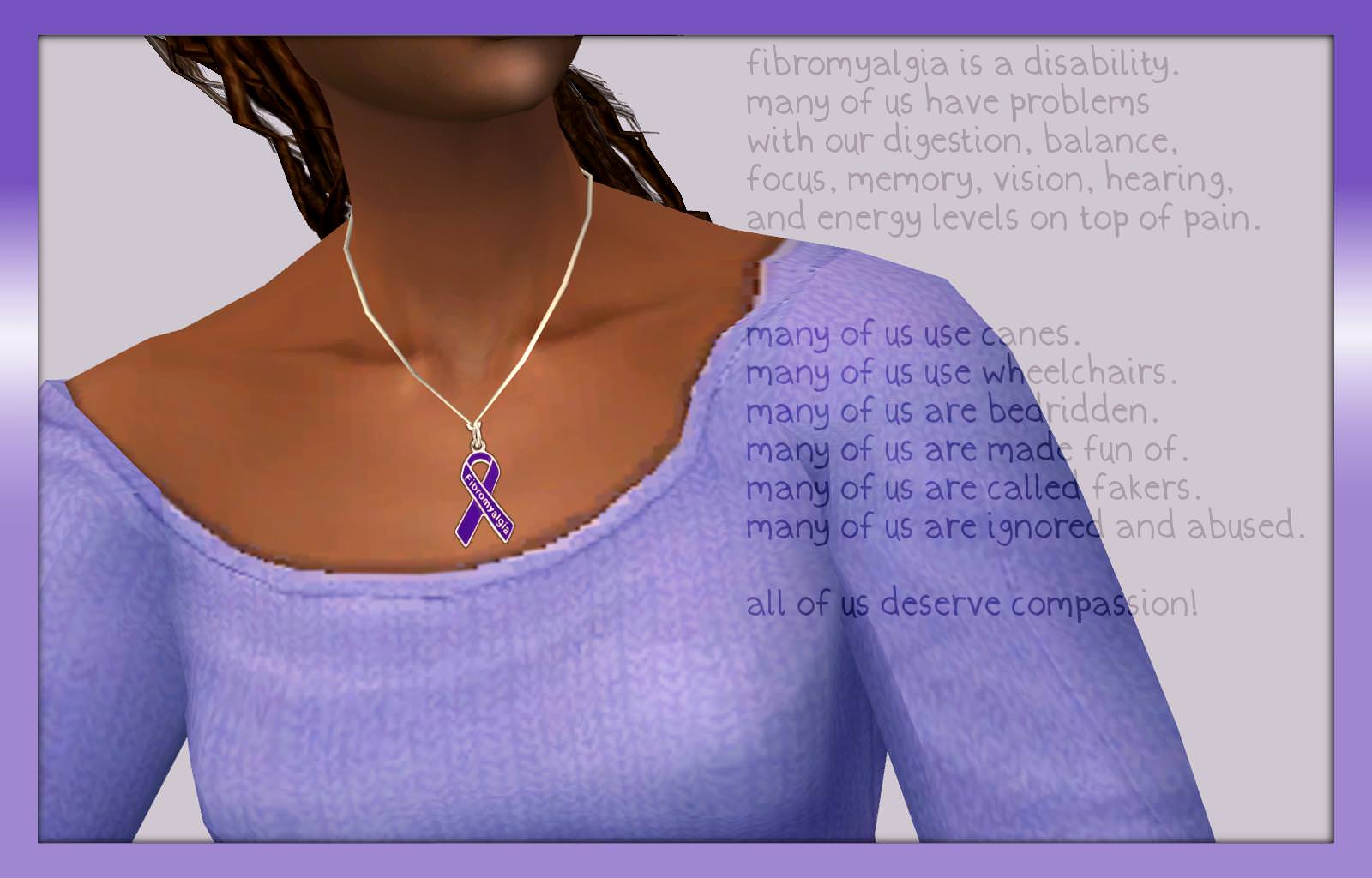 You also get a "Fibro Warrior" bracelet with a spoon and "sick club" on it in honour of the inventor of the term "cripple punk" who lost their battle with fibromyalgia. 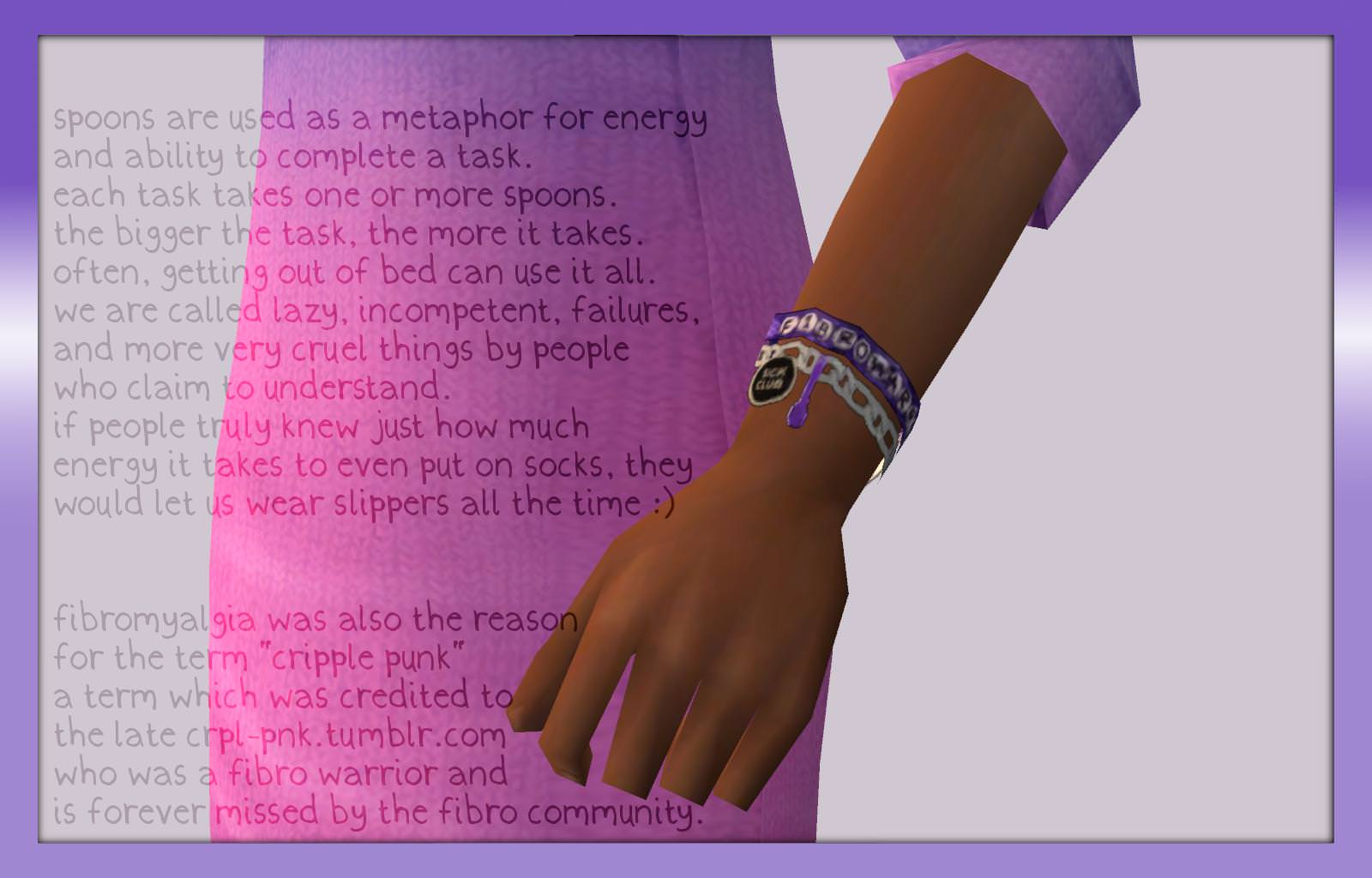 Finally, you get a pair of earrings that have purple butterflies fading into metallic silver branches that represent the nervous system of a fibro patient. 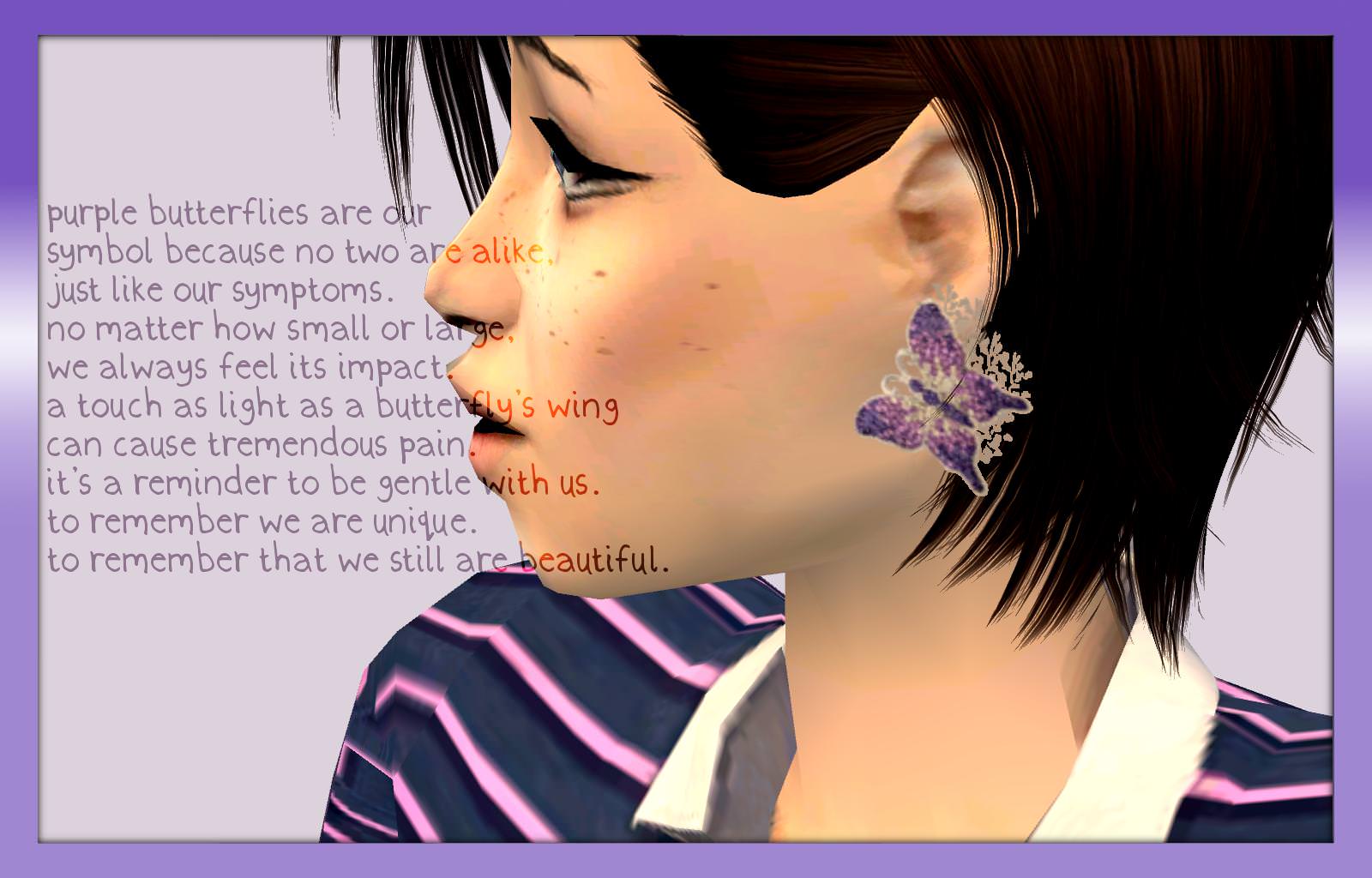 (Ignore the fact that my computer's graphics card wanted to bite the dust during the heatwave I screenshotted this in.)

Please be respectful when using these and remember to be gentle the next time someone you know is experiencing chronic pain. We need as much help as we can get.